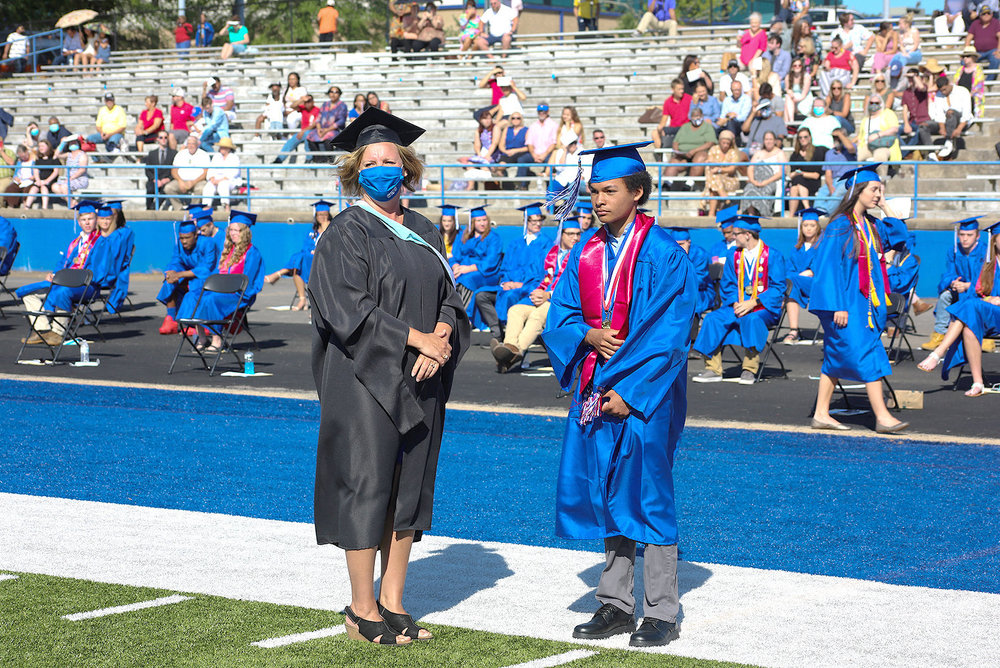 From the Cleveland Daily Banner:

Posted Saturday, June 13, 2020 8:33 pm
By KAITLIN GEBBY
More than 400 students walked across the Cleveland High School football field to collect their diplomas on Friday morning during an unconventional graduation following an unconventional final semester, but the students were determined to not let circumstances define them.

Student Government Association leader Annabelle Pelley said she was “thankful” because “this moment almost didn’t come,” referring to the coronavirus pandemic complicating graduation plans in May.

“We walked out of school for spring break not knowing we would never roam the halls as students [again],” she said.

Ashley Rodas, student-elected representative for the Class of 2020, said they entered their senior year feeling “on top of the world,” but were met with a list of unknowns.

Jack Duncan, one of four senior speakers for the Class of 2020, said generations before them have all had their defining moment.

“The [Greatest] Generation was shaped by the Great Depression and World War II, the Baby Boomers were stunned by the assassination of JFK, and Millennials came of age in the aftermath of 9/11. This idea that a singular event could have such a lasting impact is rather daunting,” he said. “

“We are not defined by what we have lost, but how we have responded,” he said, quoting Nobel Peace Prize winner Malala Yousafsai.

“We are a class that loves fiercely … that won’t back down,” Pelley said.

“In a time when it was essential to be kept apart, we found creative, resourceful ways to come together,” Duncan said.

“The Class of 2020 is the strongest class yet … and these challenges have taught us to cherish every moment,” Rodas said.

Director of Schools Dr. Russell Dyer told the Class of 2020 that their resourcefulness and creativity will “serve you well” in the years to come.

Principal Autumn O’Bryan recognized club members, athletes and 13 Cleveland High School students who earned their associate’s degree from Cleveland State Community College while working toward their high school diploma. A number of students were also recognized for joining the Armed Forces as their next step after high school.

“We will forever be united, not only as the CHS Class of 2020, but as a 2020 class of graduating seniors,” Duncan said. “As we tackle the greatest issues of our time, including wealth inequality, environmental concerns, systemic racial discrimination and a virus that is currently wreaking havoc around the world, I can personally attest to my classmates’ creativity, resourcefulness and resilience — characteristics that will be essential as we move past this current crisis and beyond.”